City of Newcastle is working with the family of Jill Emberson on a public memorial to be held at City Hall on 23 January 2020, following her sad passing overnight.

Lord Mayor of Newcastle Nuatali Nelmes said as Newcastle’s Citizen of the Year in 2019, Jill was a lion-hearted advocate in the fight against ovarian cancer.

“We are in awe of the courage Jill showed following her cancer diagnosis, as she remained determined to achieve better outcomes for others despite her own failing health. 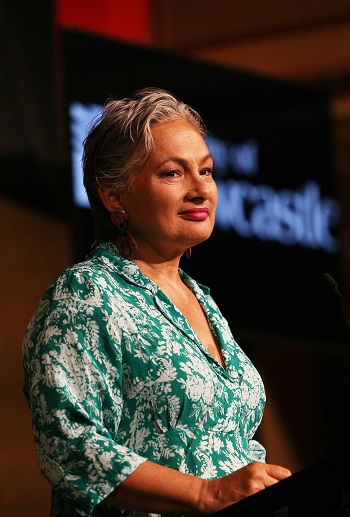 “She used her own diagnosis to help raise invaluable awareness of ovarian cancer and more than $20 million for research.

“Jill was so incredibly generous with her time, despite knowing her cancer was terminal. I was in awe of her willingness to work with the city and even to make herself available to speak with our staff, all the while in ever worsening pain and suffering,” Cr Nelmes said.

Jill’s career in journalism gave her a platform to document the sometimes-lonely battle she and other women faced against the deadliest of all women’s cancers.

After she was forced off air in early 2016 due to illness, Jill began to advocate for more funding and research while undergoing her own treatment.

Upon returning to the airwaves in 2018, Jill intimately documented her experience with ovarian cancer in the popular podcast Still Jill. In June last year, policy makers took note of her National Press Club address, ‘The Cancer Down Under Killing Too Many Women’, before the Federal Government, influenced heavily by her fierce lobbying, committed $20 million to ovarian cancer research earlier in 2019.

“I am humbled and honoured to be named Citizen of the Year in Newcastle and will use this precious opportunity to raise more awareness about ovarian cancer,” Jill said when honoured at City Hall on Australia Day 2019.

“About 1,500 Australian women are diagnosed with Ovarian cancer each year but our survival rate has been stuck at 45 per cent for decades.

“Research is the only solution to bring our survival into line with other more common cancers and for that we need awareness and funding.”

The official colour of Ovarian Cancer Australia – teal – shone from the face of the City Hall clock that night, and the City plans to honour Jill once again following consultation with her family.