Rankin Park families have a new $150,000 playground on McCaffrey Drive as City of Newcastle continues its rollout of new and upgraded facilities across the local government area.

The Coldstream Reserve facility follows delivery of three other new playgrounds by the City this year in Adamstown, Wallsend, and the incredibly popular Stockton Active Hub on the Stockton foreshore.

“Two more upgrades are set to be delivered in Wallsend at Carrington Street Reserve and Brickworks Park over the next 12 months.”

The Lord Mayor and locals will gather in Coldstream Reserve Saturday to officially open the facility, which was built by City of Newcastle as a replacement for another nearby playground which had to be closed because of mine subsidence. 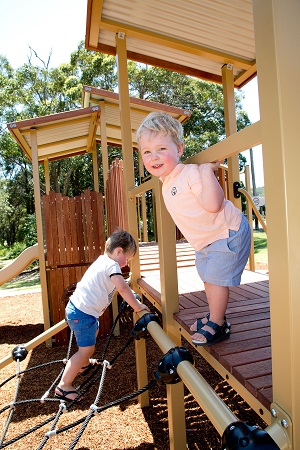 “This is the fourth playground we’ve opened this year and I know how much pleasure they bring for both kids and their families.

“After the forced closure of the Rosedale Crescent playground, the community was consulted to choose a new location, and the consensus was Coldstream Reserve just a few hundred metres away. The feedback so far is that the kids absolutely love it.”

The playground includes a range of options to challenge young bodies and minds, including a rope-based play system, platforms and slide, swing set and balance logs.

Funded by Subsidence Advisory NSW in partnership with City of Newcastle, the playground blends with the slope of the reserve, changing levels via steps in a sandstone retaining wall.

Equipment colours match surrounding eucalypts and the play area, which is fenced off from McCaffrey Drive, is accessible via a path that also leads to picnic tables under a timber shade structure.

Playgrounds earmarked for an overhaul are selected and prioritised from a biennial independent audit that assesses their existing condition against current safety standards and guidelines.

The community is invited to celebrate the opening of the new playground tomorrow, Saturday 19 October 2019 from 10.30am.